The 2nd Multidisciplinary International Symposium on Disinformation in Open Online Media (MISDOOM), discussing topics such as fake news, social bots, disinformation, filter bubbles, virality and deep fake will take place in Leiden from April 20-22, 2020. It aims to bring together researchers in different fields studying misinformation on the web. It features both a track of extended abstracts as well as Springer LNCS proceedings.

The 5th edition of IC²S² took place from July 17 to 20, 2019 at the University of Amsterdam, the Netherlands. Over 480 participants from 40 countries attended the conference, tutorials and accompanying events, such as a warmup event, job fair and datathon. The conference featured thematic presentations, poster presentations and panels on various topics related to computational social science. To get an idea of the conference, visit the Conference impression page.

As part of the opening ceremony of the conference (watch), I showed the following visualization created from information gathered during the conference registration process. A more detailed discription of this network visual can be found below.

Computational social science is often said to be highly interdisciplinary, as it typically attracts researchers from both the social sciences as well as computational science. To investigate this interdisciplinarity in more detail, we consider the scientific field migration activity of 480 registered participants of the 5th International Conference on Computational Social Science (IC²S² 2019). During the conference registration process, people were asked to enter their original scientific discipline as well as their current discipline. From this data, a so-called scientific discipline migration network was extracted.

The network is shown in the figure above. Each node (circle) in the network is a discipline. Each directed link (arrow) denotes movement from one discipline to the other. The width of a link is proportional to the link weight, i.e., the number of people moving between the disciplines that the arrow connects. The size of a node and its label correspond to the node’s weighted indegree, denoting the number of people moving to that discipline. The color of a node is proportional to its weighted outdegree, representing how many people move away from that discipline.

We can observe a number of things from this network visualization.

Finally we can note that fields such as economics and management are present, hopefully indicating how computational social science is nowadays also attracting researchers who would otherwise label themselves as being active in the field of socio-economics.

Last but not least, many people also indicate that computational social science is their original and current discipline, denoted by the self-loop. This is promising and to some extent rewarding, as the community has recently put a lot of effort in establishing computational social science as a field of its own, which apparently is taking shape already, at least based on the field’s flagship conference’s participants of today.

On October 2, 2019, sunny Santa Clara, California (US) will be the scene for the 3rd International Workshop on Mining Actionable Insights from Social Networks (MAISoN). We welcome original submissions on topics related to social network mining and related fields. For submission instructions, visit the website: http://www.maisonworkshop.org.
The submission deadline is July 15, 2019, with notification on August 2.

Following editions at WSDM 2017 and IJCAI 2018, this year the workshop is located with the ACM SIGIR International Conference on the Theory of Information Retrieval (ICTIR).

Like in previous years, accepted contributions will be eligble to extend their work for the journal special issue associated to the workshop. This year, the special issue will be part of the Springer Information Retrieval Journal.

The Dutch Network Science Society is a society aimed at bringing together researchers in the Netherlands working on the topic of network science; the extraction of knowledge and insights from theoretical and empirical analysis of complex networks. As of its founding in 2018, I am a board member of this society. On May 7 in the afternoon at TU Delft, the official opening of this event will take place, including invited lectures, pitches and networking opportunities. For details, see below. Please consider attending the event and register via the website: http://www.netsci.nl. 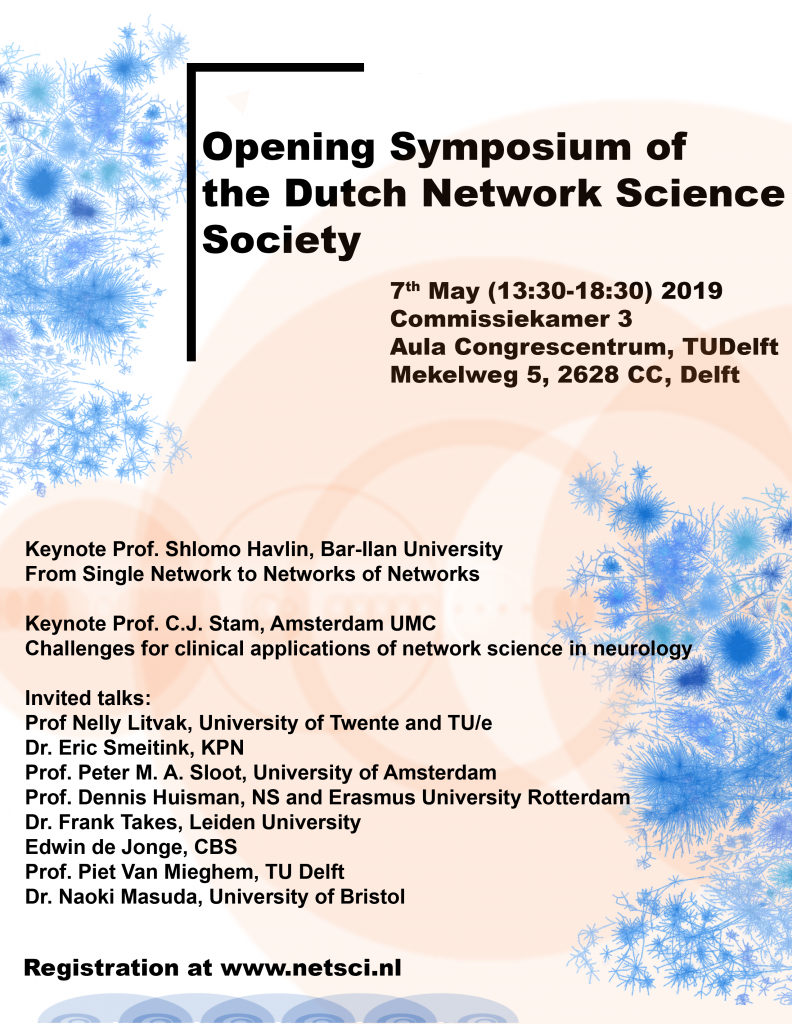 ABOUT ME
I am an associate professor at LIACS, the computer science and artificial intelligence department of Leiden University. My research interest is in network science, dealing with methods and algorithms for knowledge discovery from (social) network data, covering applications in economics, science studies and computational social science.

I supervise bachelor, master and PhD students, and teach courses on competitive programming and social network analysis. Moreover, I am director of education of the bachelor programmes Informatica (Computer Science) and Data Science & Artificial Intelligence.